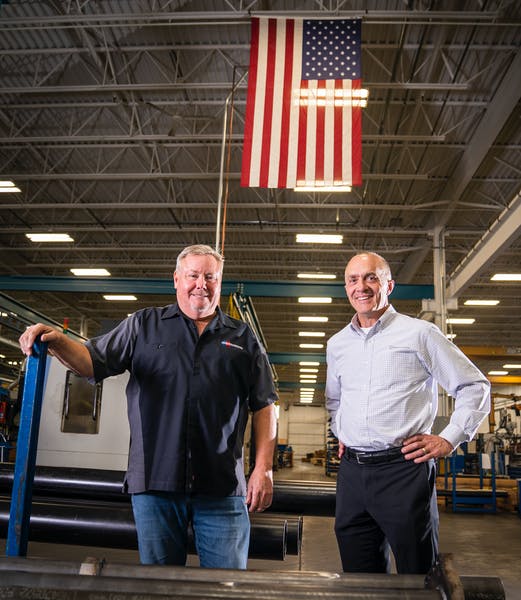 Aggressive Hydraulics, an East Bethel-based maker of parts for trucks and other equipment, is expanding again.

The company was born of the inventiveness of seven employee-owners, five of whom lost their factory jobs in 2000 to an industry consolidator.

Today, those employee-founders still pay themselves modest $75,000 salaries; their last raise was in 2009. They and their workers have built a company valued at up to $30 million.

Aggressive has grown from $5 million in revenue a decade ago to $25 million. In 2013, it vacated two antiquated, leased buildings and opened a $5 million plant in East Bethel. Employment is up 50% since, to 75 people.

Some workers have made up to $100,000 a year, including overtime. Fifteen boast salaries bigger than the owners.

“This was never about how much money the founders could make,” said founder and CEO Paul Johnson, who graduated from nearby St. Francis High School.”We put in $200,000 cash in total and we didn’t pay ourselves for two years. And then we paid ourselves $25,000 a year until 2009. We have always put the company and employees first.

“It was about creating the best products and service and the best place to work. We’re just the stewards here.”

Aggressive has broken ground on a 40,000-square-foot expansion to the East Bethel plant, which has become constrained at its current size of 60,000 square feet. The $3 million in expansion financing was arranged by BankCherokee with assistance from the town of East Bethel in the form of a tax-increment loan for site preparation.

Aggressive designs and manufactures hydraulic cylinders for new and used equipment made by manufacturers of trucks for garbage and recycling, amusement parks, agricultural and forestry and oil-field equipment. Some of its larger U.S. competitors import lower-cost product from Asia and Central America.And it also competes with Chinese-based manufacturers that also price lower.

Aggressive competes on quality and service, including rush-order replacement parts that can’t be provided overnight from China.

Justin Swarts, service and purchasing manager for Con-Tech, the southern Minnesota maker of concrete-mixer trucks, said he long has purchased from Aggressive. “Their pricing is fairly competitive and their word is really good,” Swarts said. “They do what they say they are going to do. Also, we like to do business with a small Minnesota-owned manufacturer.”

Despite the success of Aggressive, its expansion carries some risk. It has pricing constraints because it makes a lot of different parts and doesn’t benefit from mass production.

“This is somewhat of a flywheel,” Johnson said. “We need to grow to retain our customers. And we must expand our capability with higher volumes. We have to leverage the value of those customers. This also puts us into position to sell those incremental capabilities to other customers. We also want to leverage our ability to buy steel. That all adds up to increasing the value of company and employee retention.”

The expansion has been easier to finance than the company’s last one in 2012 and 2013.

At that time, real estate prices were still depressed following the Great Recession. BankCherokee couldn’t get the valuation it needed to fully fund the loan. It took more equity from the employee-owners, a TIF loan from the city as well as credit from the Metropolitan Consortium of Community Developers, which typically makes small inner-city loans, to complete the package. Everybody is getting paid back on time.

“Aggressive started with a lot of industry experience,” said Roger Hamilton of BankCherokee. “They came with a niche and a plan and an experienced leadership team. And Paul and his team are long-term thinkers. We’ve been talking to them about expansion for five years. They are conservative.”

Johnson said Aggressive’s managers wanted to be sure the expansion-related debt service could be covered by today’s revenue.

“We wanted to know that we could cash flow the expansion,” Johnson said. “We didn’t want to be under the gun.”

Johnson, 59, has worked in manufacturing since graduating college. He has passed on opportunities to sell the company to private-equity firms and larger operators. He aspires to generate enough work to grow profitably and employ 100 within five years.

“If we take care of the company and the employees, it will take care of us,” he said. “We grew up here and built this business over 19 years. It is our legacy.”

Neal St. Anthony has been a Star Tribune business columnist/reporter since 1984.

Visit Stories to watch a video about our longstanding business relationship with Aggressive Hydraulics.